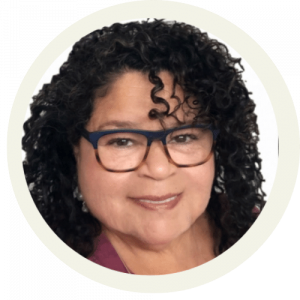 Marti DeLeon began her remarkable journey with the divine when she was just a little girl. Her mother, Mi-Ama, was the first to notice these spiritual gifts when Marti was 4 years old. Despite Mi-Ama’s guidance, Marti did not fully accept her spiritual gifts until nearly 30 years later. A spiritual guide Archangel Michael first established a connection with Marti. In the initial message she received, Archangel Michael stated that it was time for her to start helping others channel and share these messages. Marti shares this experience in vivid detail in her debut book, You Are Worthy! Of Manifesting What You Want in Life.
I resisted – until I heard his loud, deep voice say: Marti, you see that lamp (lamp was sitting next to me) I said yes – then he said – you see the cord on the lamp that plugs into the wall? — I said yes… He went on to say –when you tune into my energy, it’s the same as the plug in the lamp connecting to the electrical power in the wall. The light flowing through the lamp is the same as my messages channeling through you. And, just like the on/off switch in the lamp, you can turn the messages on/off whenever you want. And I said ok I’m in!
Today, Marti is a dedicated spiritual advisor, intuitive life coach, teacher, and writer living in Southern California. Marti is a certified Angel Therapy Practitioner, Angelic Healing Practitioner, Founder, and Instructor, and Integrated Energy Therapy Master Instructor.
Marti DeLeon is committed to helping others to heal, grow and learn. She offers private angel guidance sessions, intuitive life coaching sessions, and online workshops to help others discover the healing power of self-forgiveness and unconditional self-love.